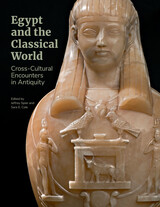 From Mycenaean weaponry found among the cargo of a Bronze Age shipwreck off the Turkish coast to the Egyptian-inspired domestic interiors of a luxury villa built in Greece during the Roman Empire, Egypt and the Classical World documents two millennia of cultural and artistic interconnectedness in the ancient Mediterranean. This volume gathers pioneering research from the Getty scholars' symposium that helped shape the major international loan exhibition Beyond the Nile: Egypt and the Classical World (J. Paul Getty Museum, 2018).

Generously illustrated essays consider a range of artistic and other material evidence, including archaeological finds, artworks, papyri, and inscriptions, to shed light on cultural interactions between Egypt, Greece, and Rome from the Bronze Age to the Late Period and Ptolemaic dynasty to the Roman Empire. The military's role as a conduit of knowledge and ideas in the Bronze Age Aegean, and an in-depth study of hieroglyphic Egyptian inscriptions found on Roman obelisks offer but two examples of scholarly lacunae addressed by this publication. Specialists across the fields of art history, archaeology, Classics, Egyptology, and philology will benefit from the volume's investigations into syncretic processes that enlivened and informed nearly twenty-five hundred years of dynamic cultural exchange.

The free online edition of this open-access publication is available at www.getty.edu/publications/egypt-classical-world/ and includes zoomable, high-resolution photography. Also available are free PDF, EPUB, and Kindle/MOBI downloads of the book.
AUTHOR BIOGRAPHY
Jeffrey Spier is Anissa and Paul John Balson II Senior Curator of Antiquities at the J. Paul Getty Museum.

Sara E. Cole is assistant curator of antiquities at the J. Paul Getty Museum.
TABLE OF CONTENTS
Blank Page
Contents
Introduction
1. From Thutmose III to Homer to Blackadder: Egypt, the Aegean, and the “Barbarian Periphery” of the Late Bronze Age World System
2. Mediterranean Encounters: Greeks, Carians, and Egyptians in the First Millennium BC
3. “I Am Isis”: The Role of Speech in the Cult of Isis
4. The Creation of New “Cultural Codes”: The Ptolemaic Queens and Their Syncretic Processes with Isis, Hathor, and Aphrodite
5. The Kellis Mammisi: A Painted Chapel from the Final Centuries of the Ancient Egyptian Religion
6. Appropriation and Synthesis in the Villa of Herodes Atticus at Eva (Loukou), Greece
7. “To Isis the Great, Lady of Benevento”: Privately Dedicated Egyptian Obelisks in Imperial Rome and the Twin Obelisks of Benevento Reedited
Contributors