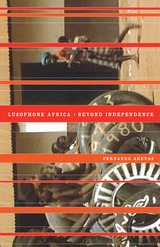 Lusophone Africa: Beyond Independence is a study of the contemporary cultural production of Portuguese-speaking Africa and its critical engagement with globalization in the aftermath of colonialism, especially since the advent of multiparty politics and market-oriented economies.
Exploring the evolving relationship of Lusophone Africa with Portugal, its former colonial power, and Brazil, Fernando Arenas situates the countries on the geopolitical map of contemporary global forces. Drawing from popular music, film, literature, cultural history, geopolitics, and critical theory to investigate the postcolonial condition of Portuguese-speaking Africa, Arenas offers an entirely original discussion of world music phenomenon Cesária Évora, as well as the most thorough examination to date of Lusophone African cinema and of Angolan post-civil-war fiction.
Throughout, Arenas evokes the rich multidimensionality of this community of African nations as a whole and of its individual parts: Angola, Cape Verde, Guinea-Bissau, and Mozambique, and São Tomé and Príncipe since they gained their independence in the mid-1970s. In doing so, he puts forth a conceptual framework for understanding, for the first time, recent cultural and historical developments in Portuguese-speaking Africa.
AUTHOR BIOGRAPHY
Fernando Arenas is professor of Lusophone African, Brazilian, and Portuguese studies at the University of Minnesota.
REVIEWS

"Lusophone Africa is a pioneering, exceedingly well researched and well-documented study of important aspects of Lusophone African cultural expression in their postcolonial social and political contexts. Along with being a significant scholarly work, because of Fernando Arenas’ numerous visits to the Lusophone African countries, where he has met with many eminent musicians and singers, movie makers, and authors of literary works, this book is also a very captivating memoir." —Russel G. Hamilton, Vanderbilt University


Contents
Abbreviations
Acknowledgments
Introduction: Lusophone Africa Within the Global and the Postcolonial
1. African, Portuguese, and Brazilian Interconnections: The Lusophone Transatlantic Matrix
2. Cesária Évora and the Globalization of Cape Verdean Music
3. Lusophone Africa on Screen: After Utopia and Before the End of Hope
4. Angolan Literature: After Independence and Under the Shadow of War
Conclusion
Permissions
Notes
Works Cited
Index