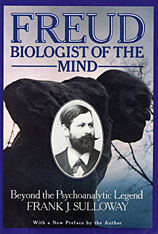 Freud, Biologist of the Mind: Beyond the Psychoanalytic Legend, With a New Preface by the Author
by Frank J. Sulloway
Harvard University Press, 1992
Paper: 978-0-674-32335-3
In this monumental intellectual biography, Frank Sulloway demonstrates that Freud always remained, despite his denials, a biologist of the mind; and, indeed, that his most creative inspirations derived significantly from biology. Sulloway analyzes the political aspects of the complex myth of Freud as psychoanalytic hero as it served to consolidate the analytic movement. This is a revolutionary reassessment of Freud and psychoanalysis.

Frank J. Sulloway is Visiting Scholar in the Program in Science, Technology, and Society at the Massachusetts Institute of Technology.