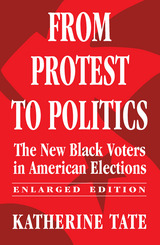 The struggle for civil rights among black Americans has moved into the voting booth. How such a shift came about and what it means-is revealed in this timely reflection on black presidential politics in recent years.

Since 1984, largely as a result of Jesse Jackson's presidential bid, blacks have been galvanized politically. Drawing on a substantial national survey of black voters, Katherine Tate shows how this process manifested itself at the polls in 1984 and 1988. In an analysis of the black presidential vote by region, income, age, and gender, she is able to identify unique aspects of the black experience as they shape political behavior, and to answer long-standing questions about that behavior. How, for instance, does the rise of conservatism among blacks influence their voting patterns? Is class more powerful than race in determining voting? And what is the value of the notion of a black political party?

In the 1990s, Tate suggests, black organizations will continue to stress civil rights over economic development for one clear, compelling reason: Republican resistance to addressing black needs. In this, and in the friction engendered by affirmative action, she finds an explanation for the slackening of black voting. Tate does not, however, see blacks abandoning the political game. Instead, she predicts their continued search for leaders who prefer the ballot box to other kinds of protest, and for men and women who can deliver political programs of racial equality.

Unique in its focus on the black electorate, this study illuminates a little understood and tremendously significant aspect of American politics. It will benefit those who wish to understand better the subtle interplay of race and politics, at the voting booth and beyond.

1. The New Black Politics
The New Black Voter and Jackson's Presidential Campaigns
The Second Stage of the Civil Rights Movement?
2. Race, Class, and Black Policy Views
Is the Significance of Race Increasing or Declining?
Black Political Liberalism and Conservatism
United by Race or Divided by Class?
3. Blacks and the Democratic Party
A Historical Overview
Explaining Black Support for the Democratic Party Today
Impact of the Reagan Presidency and the Jackson Candidacies
4. Group Resources and Black Electoral Participation
Black Collective Resources 77 Who within the Black Community Participates?
The Impact of Group-Based Political Resources on Black Participation
Black Officeseeking and Participation
5. Black Turnout in the 1984 and 1988 Presidential Primaries and Elections
Who Voted in the 1984 and 1988 Presidential Primaries?
The Impact of Reagan, Bush, and Jackson on Turnout in the Presidential Elections
Blacks as Strategic Voters
6. The Black Vote in 1984 and 1988
Blacks' Evaluations of Presidential Nominees and Presidents
Economic Conditions and the Black Presidential Vote
Black Support for Jesse Jackson
7. Black Power and Electoral Politics
The Black Power Movement
Black Political Independence and Racial Voting
The Resurgence of Black Nationalism
8 Black Electoral Politics and Beyond
Group-Oriented Politics or a Movement?
Black Alternatives to the Ballot

From Protest to Politics makes an important contribution to our understanding of black electoral behavior. Tate has a deep and broad understanding of the research literature on black political behavior. Her data analyses are sound, and her interpretation of the data is solid.
--Paul R. Abramson, Michigan State University
TABLE OF CONTENTS