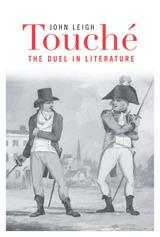 The monarchs of seventeenth-century Europe put a surprisingly high priority on the abolition of dueling, seeing its eradication as an important step from barbarism toward a rational state monopoly on justice. But it was one thing to ban dueling and another to stop it. Duelists continued to kill each other with swords or pistols in significant numbers deep into the nineteenth century. In 1883 Maupassant called dueling “the last of our unreasonable customs.” As a dramatic and forbidden ritual from another age, the duel retained a powerful hold on the public mind and, in particular, the literary imagination.

Many of the greatest names in Western literature wrote about or even fought in duels, among them Corneille, Molière, Richardson, Rousseau, Pushkin, Dickens, Hugo, Dumas, Twain, Conrad, Chekhov, and Mann. As John Leigh explains, the duel was a gift as a plot device. But writers also sought to discover in duels something more fundamental about human conflict and how we face our fears of humiliation, pain, and death. The duel was, for some, a social cause, a scourge to be mocked or lamented; yet even its critics could be seduced by its risk and glamour. Some conservatives defended dueling by arguing that the man of noble bearing who cared less about living than living with honor was everything that the contemporary bourgeois was not. The literary history of the duel, as Touché makes clear, illuminates the tensions that attended the birth of the modern world.

REVIEWS
An intriguing book… Ranging over two dozen examples of novels, poems and plays, Leigh describes how this ‘medieval anomaly’ continued to preoccupy writers, even as they dismissed dueling as an old-fashioned folly… The strength of Leigh’s book is that it makes sense of such an anachronistic act… Some of the most striking moments are when he invokes potential modern parallels to duels—American Westerns, Olympic fencing… His entertaining study will remind readers why this archaic form of male combat can still be compelling, and how it could live on.
-- The Economist


Throughout Touché, Leigh shows himself a master of the neatly turned observation… An excellent [book].
-- Michael Dirda Washington Post


A duel always carried with it some improvisatory aspect, what Leigh calls ‘a sort of joyous death-defying creativity, an ingenuity which almost excuses the fatalities that followed.’ Touché itself has something of this quality. The depth and scope of Leigh’s reading are never in doubt, but it is the idiosyncratic willfulness of his enthusiasm that frees this book from the dead hand of cultural studies under which it might otherwise have languished… Urbane and elegantly penned.
-- Jonathan Keates Literary Review


Touché is keen, clever, thorough, crisply humorous and impressive in its sources.
-- Richard Davenport-Hines The Spectator


With a [book] like Touché, the temptation to linger on anecdotes must be strong, but Leigh stays admirably focused: he wants to understand why the duel was so pervasive in stories, and to uncover the meanings writers found or placed in it. It soon becomes clear that, in a variety of ways, the practice of dueling was wrapped up in writing about it.
-- James Guida New Yorker


It is the extraordinary prevalence of duels in literature that John Leigh explores in a study that ranges from the early 17th century to the early 20th century, and that moves confidently across the continent of European literature… Leigh has a remarkable range of reading to hand and is easy with the different proprieties of various European languages. He wears his learning lightly—with a nonchalance, one might think, that matches many of the duelists we encounter in his book.
-- John Mullan New Statesman


This is an excellent study of the strange survival of the duel into the eighteenth and nineteenth centuries, and its imaginative appeal in literature. The author’s unexpected and illuminating insights come across in a pleasing, infectious way.
-- Ritchie Robertson, University of Oxford


Touché is remarkable. Through the insightful analysis of classic works in English, French, German, Russian, and Italian literature from the past three centuries, the book generates a vivid history of dueling. It is brilliantly written, filled with apt allusions to contemporary art and music—a pleasure to read.
-- Theodore Ziolkowski, Princeton University


Erudite, enjoyable and wide ranging, taking in authorities as disparate as St. Augustine and Jerome K Jerome. Leigh has the knack of the well-minted phrase.
-- Richard Hopton The Field


Touché demonstrates how some of the greatest writers of the modern era used the duel in their works (and sometimes literally in their own lives) to help their readers come to grips with the emerging modern world.
-- M. A. Byron Choice


[Leigh] has produced a surprisingly long list of plays and fictions in a variety of languages in which [duels] feature. He uses his haul to trace attitudes to dueling, often made clearer in literature than by the historical record, through a series of close readings of texts where duels are not merely a plot device but reveal something about human nature and the evolution of social values…His elegantly written, free-ranging encounter with the literature of dueling shows why the duelist became and stayed a hero.
-- David Coward Times Literary Supplement