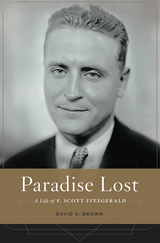 Pigeonholed in popular memory as a Jazz Age epicurean, a playboy, and an emblem of the Lost Generation, F. Scott Fitzgerald was at heart a moralist struck by the nation’s shifting mood and manners after World War I. In Paradise Lost, David Brown contends that Fitzgerald’s deepest allegiances were to a fading antebellum world he associated with his father’s Chesapeake Bay roots. Yet as a midwesterner, an Irish Catholic, and a perpetually in-debt author, he felt like an outsider in the haute bourgeoisie haunts of Lake Forest, Princeton, and Hollywood—places that left an indelible mark on his worldview.

In this comprehensive biography, Brown reexamines Fitzgerald’s childhood, first loves, and difficult marriage to Zelda Sayre. He looks at Fitzgerald’s friendship with Hemingway, the golden years that culminated with Gatsby, and his increasing alcohol abuse and declining fortunes which coincided with Zelda’s institutionalization and the nation’s economic collapse.

Placing Fitzgerald in the company of Progressive intellectuals such as Charles Beard, Randolph Bourne, and Thorstein Veblen, Brown reveals Fitzgerald as a writer with an encompassing historical imagination not suggested by his reputation as “the chronicler of the Jazz Age.” His best novels, stories, and essays take the measure of both the immediate moment and the more distant rhythms of capital accumulation, immigration, and sexual politics that were moving America further away from its Protestant agrarian moorings. Fitzgerald wrote powerfully about change in America, Brown shows, because he saw it as the dominant theme in his own family history and life.

REVIEWS
Brown’s book is a useful corrective to the figure of F. Scott Fitzgerald as a hopeless drunk and unrestrained reveler—diving into the fountain at the Plaza and all that—which has been vastly overdone…One of the splendid services rendered by Brown is to have convincingly made the case that F. Scott Fitzgerald was an original in a way much grander than he himself realized.
-- Joseph Epstein Wall Street Journal


[An] excellent book… Paradise Lost…conjures up an entirely different portrait from the one painted by previous biographers… Brown’s book,…in its breadth of perspective and seriousness of intent, makes most biographies seem to consist mainly of tittle-tattle and random gossip.
-- John Banville New York Review of Books


What I admire about Paradise Lost is that it moves well beyond the hackneyed images in which the author lives in the prison house of his own fragile dreams, a sybaritic social climber who squanders his talent by drinking…This biography seems wildly relevant in a time when raw wealth has again taken on such an emblematic value…More than any biographer before him, Brown reveals the degree to which Fitzgerald understood the politics of his era…A splendid biography.
-- Jay Parini Literary Review


Brown has delivered an insightful, thought-provoking and at times entertaining rendering of [Fitzgerald’s] life…For fans of The Great Gatsby, there is much to like in Paradise Lost.
-- James McGrath Morris Dallas Morning News


Brown gets closer to a real Fitzgerald than anyone else.
-- Brian Morton The Herald


The book is rich with detailed historical, philosophical, and sociological examples that place Fitzgerald’s work within a historical situation that isn’t simply the stereotype of ‘Jazz Age Excess.’…Brown re-shapes the standard understanding of the Fitzgeralds as rapacious consumers into something more nuanced…By writing this respectful yet critical biography, David S. Brown has done much to add to the now-prodigious legacy of a man who, like Jay Gatsby, died alone despite having done so much for so many.
-- Eric Rovie PopMatters


Sometimes when a historian turns to a literary figure the results are refreshing. Think of David Donald writing about Thomas Wolfe and now David S. Brown on Fitzgerald… What sets this biography apart from the others is its emphasis on Fitzgerald's ‘historical sensibility.’
-- Carl Rollyson New Criterion


Brown’s biography strives to forgo the well-known anecdotes to instead reinsert Fitzgerald into his historical context.
-- Carl Wilkinson Financial Times


Paradise Lost accomplishes much in its aim to contextualize Fitzgerald within both American historical and literary historical parameters. This new biography manages to get past the trappings of Fitzgerald’s boozy flapper-era persona and to credit his talent for taking the pulse of the America in which he lived.
-- Christina Hunt Mahoney Irish Times


Brown writes a tight, finely observed character study of F. Scott Fitzgerald…Brown deftly explores the great uncertainties of social class in Fitzgerald’s day and the outsider feelings that clouded his life and psyche. Making sense of his time-bound views of African Americans and women proves more of a challenge. Carefully researched and a pleasure to read, Brown’s persuasive, original account will entice Fitzgerald fans and cultural historians alike.
-- Publishers Weekly


Looks beyond Gatsby and the famous stories of Fitzgerald’s excesses, and instead explores his correspondence with the Progressive intellectuals of his day to show that—if his prose left any doubt—Fitzgerald held a dim view of the decadent world in which he found himself trapped.
-- Mene Ukueberuwa New Criterion


[An] engaging portrait…Brown draws extensively on the autobiographical aspects of Fitzgerald’s novels and stories.
-- Kirkus Reviews


[An] enjoyable biography…Brown’s Paradise Lost is welcome in that it filters some of the poor-boy-in-life-and-love consensus.
-- N. J. McGarrigle Irish Times


David Brown provides the kind of context that other biographers, caught up in the myths that Scott and Zelda created about themselves, have not provided. A pleasure to read.
-- James L. W. West III, Pennsylvania State University


In this masterful book, Brown brings an extensive knowledge of American cultural, social, and political history to the details of F. Scott Fitzgerald’s life and works. The result is a study that allows the reader to consider Fitzgerald from a new perspective.
-- Bryant Mangum, Virginia Commonwealth University