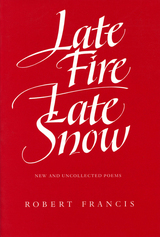 Late Fire, Late Snow: New and Uncollected Poems
by Robert Francis
University of Massachusetts Press, 1992
Paper: 978-0-87023-814-7
The poems offered here were gathered from what Robert Francis wrote in the last decade of his life and from earlier work not available either in his seven previous books or his Collected Poems, 1936-1976. While aging is a recurring theme, the later poems converse with the earlier ones in an engaging mixture of subject and tone, mingling the pastoral with the political, the contemplative with the Chaplinesque. Recipient of the Shelly Memorial Award, Prix de Rome, and Academy of American Poets Fellowship, Francis lived in Amherst, Massachusetts, until his death in 1987 at age eighty-five.
AUTHOR BIOGRAPHY
Robert Francis was born in Pennsylvania in 1901 and then moved to Massachusetts where he graduated from Harvard University in 1923. Returning to Amherst, Massachusetts, Francis published his first volume of poetry in 1936, which received the Shelly Memorial Prize. In 1975, after his long and distinguished writing career, the University of Massachusetts Press established its annual Juniper Prize in Poetry in Francis' honor.