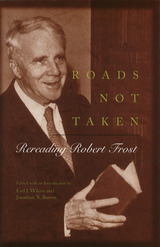 In Roads Not Taken, Earl J. Wilcox and Jonathan N. Barron bring a new freshness and depth to the study of one of America's greatest poets. While some critics discounted Frost as a poet without technical skill, rhetorical complexity, or intellectual depth, over the past decade scholars have begun to view Robert Frost's work from many new perspectives. Critical hermeneutics, culture studies, feminism, postmodernism, and textual editing all have had their impact on readings of the poet's life and work. This collection of essays is the first to account for the variety of these new perceptions.

Appealing to a wide literary community, and in keeping with Frost's own poetic goals, these twelve essays fall into four distinct categories: gender, biography and cultural studies, the intertext, and poetics and theory.

All the contributors, many of whom have written books on Frost, are widely recognized scholars. Their diverse viewpoints and collective expertise make this volume of essays the most significant contribution to Frost criticism to be published in over twenty years.

AUTHOR BIOGRAPHY
About the Editors

Earl J. Wilcox is Professor of English at Winthrop University in Rock Hill, South Carolina. He is the author or editor of several books, including His Incalculable Influence on Others: Essays on Robert Frost in Our Time. He also founded and edited the Robert Frost Review (1991-2000).

Jonathan N. Barron is Associate Professor of English at the University of Southern Mississippi in Hattiesburg. He is the author of Articles on American Poetry and co-editor of Jewish American Poetry: Poems, Commentary, and Reflection. He recently assumed editorship of the Robert Frost Review.