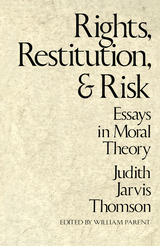 Moral theory should be simple: the moral theorist attends to ordinary human action to explain what makes some acts right and others wrong, and we need no microscope to observe a human act. Yet no moral theory that is simple captures all of the morally relevant facts.

In a set of vivid examples, stories, and cases Judith Thomson shows just how wide an array of moral considerations bears on all but the simplest of problems. She is a philosophical analyst of the highest caliber who can tease a multitude of implications out of the story of a mere bit of eavesdropping. She is also a master teller of tales which have a philosophical bite. Beyond these pleasures, however, she brings new depth of understanding to some of the most pressing moral issues of the moment, notably abortion. Thomson's essays determinedly confront the most difficult questions: What is it to have a moral right to life, or any other right? What is the relation between the infringement of such rights and restitution? How is rights theory to deal with the imposition of risk?

1. A Defense of Abortion
2. Rights and Deaths
3. Self-Defense and Rights
4. Some Ruminations on Rights
5. Rights and Compensation
6. Killing, Letting Die, and the Trolley Problem
7. The Trolley Problem
8. The Right to Privacy
9. Preferential Hiring
10. Some Questions about Government Regulation of Behavior
11. Imposing Risks
12. Remarks on Causation and Liability
13. Liability and Individualized Evidence

These essays are distinguished examples of analytical philosophy: clear, highly intelligent, and scrupulously argued. The presentation is forceful, and several pieces speak directly to important matters of general concern, such as abortion and positive discrimination. Thomson's use of examples is particularly striking. They are starkly presented, and notably unsentimental. Some may find the tone heartless. That effect is not unintentional, and the very bare and unapologetic presentation is designed to shock the reader into reflection. Her work reaches towards morally adventurous conclusions, and is impatient of many received pieties.
--Bernard Williams
TABLE OF CONTENTS