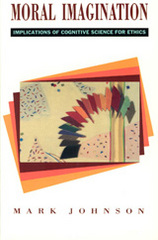 Using path-breaking discoveries of cognitive science, Mark Johnson argues that humans are fundamentally imaginative moral animals, challenging the view that morality is simply a system of universal laws dictated by reason. According to the Western moral tradition, we make ethical decisions by applying universal laws to concrete situations. But Johnson shows how research in cognitive science undermines this view and reveals that imagination has an essential role in ethical deliberation.

Expanding his innovative studies of human reason in Metaphors We Live By and The Body in the Mind, Johnson provides the tools for more practical, realistic, and constructive moral reflection.
TABLE OF CONTENTS


Preface
Acknowledgments
Introduction: How Cognitive Science Changes Ethics
1: Reason as Force: The Moral Law Folk Theory
2: Metaphoric Morality
3: The Metaphoric Basis of Moral Theory
4: Beyond Rules
5: The Impoverishment of Reason: Our Enlightenment Legacy
6: What's Wrong with the Objectivist Self
7: The Narrative Context of Self and Action
8: Moral Imagination
9: Living without Absolutes: Objectivity and the Conditions for Criticism
10: Preserving Our Best Enlightenment Moral Ideals
Notes
Index