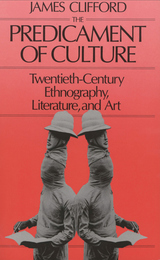 When culture makes itself at home in motion, where does an anthropologist stand? In a follow-up to The Predicament of Culture, one of the defining books for anthropology in the last decade, James Clifford takes the proper measure: a moving picture of a world that doesn’t stand still, that reveals itself en route, in the airport lounge and the parking lot as much as in the marketplace and the museum.

In this collage of essays, meditations, poems, and travel reports, Clifford takes travel and its difficult companion, translation, as openings into a complex modernity. He contemplates a world ever more connected yet not homogeneous, a global history proceeding from the fraught legacies of exploration, colonization, capitalist expansion, immigration, labor mobility, and tourism. Ranging from Highland New Guinea to northern California, from Vancouver to London, he probes current approaches to the interpretation and display of non-Western arts and cultures. Wherever people and things cross paths and where institutional forces work to discipline unruly encounters, Clifford’s concern is with struggles to displace stereotypes, to recognize divergent histories, to sustain “postcolonial” and “tribal” identities in contexts of domination and globalization.

Travel, diaspora, border crossing, self-location, the making of homes away from home: these are transcultural predicaments for the late twentieth century. The map that might account for them, the history of an entangled modernity, emerges here as an unfinished series of paths and negotiations, leading in many directions while returning again and again to the struggles and arts of cultural encounter, the impossible, inescapable tasks of translation.