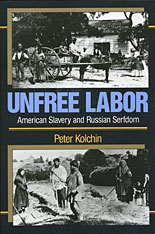 Two massive systems of unfree labor arose, a world apart from each other, in the late sixteenth and early seventeenth centuries. The American enslavement of blacks and the Russian subjection of serfs flourished in different ways and varying degrees until they were legally abolished in the mid-nineteenth century. Historian Peter Kolchin compares and contrasts the two systems over time in this magisterial book, which clarifies the organization, structure, and dynamics of both social entities, highlighting their basic similarities while pointing out important differences discernible only in comparative perspective.

These differences involved both the masters and the bondsmen. The independence and resident mentality of American slaveholders facilitated the emergence of a vigorous crusade to defend slavery from outside attack, whereas an absentee orientation and dependence on the central government rendered serfholders unable successfully to defend serfdom. Russian serfs, who generally lived on larger holdings than American slaves and faced less immediate interference in their everyday lives, found it easier to assert their communal autonomy but showed relatively little solidarity with peasants outside their own villages; American slaves, by contrast, were both more individualistic and more able to identify with all other blacks, both slave and free.

Kolchin has discovered apparently universal features in master–bondsman relations, a central focus of his study, but he also shows their basic differences as he compares slave and serf life and chronicles patterns of resistance. If the masters had the upper hand, the slaves and serfs played major roles in shaping, and setting limits to, their own bondage.

This truly unprecedented comparative work will fascinate historians, sociologists, and all social scientists, particularly those with an interest in comparative history and studies in slavery.
TABLE OF CONTENTS