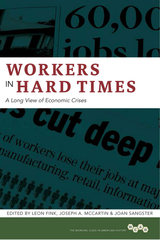 Seeking to historicize the 2007-2009 Great Recession, this volume of essays situates the current economic crisis and its impact on workers in the context of previous abrupt shifts in the modern-day capitalist marketplace. Contributors use examples from industrialized North America, South America, Europe, Asia, and Australia to demonstrate how workers and states have responded to those shifts and to their disempowering effects on labor.

Since the Industrial Revolution, contributors argue, factors such as race, sex, and state intervention have mediated both the effect of economic depressions on workers' lives and workers' responses to those depressions. Contributors also posit a varying dynamic between political upheaval and economic crises, and between workers and the welfare state.

The volume ends with an examination of today's "Great Recession": its historical distinctiveness, its connection to neoliberalism, and its attendant expressions of worker status and agency around the world. A sobering conclusion lays out a likely future for workers--one not far removed from the instability and privation of the nineteenth century.

The essays in this volume offer up no easy solutions to the challenges facing today's workers. Nevertheless, they make clear that cogent historical thinking is crucial to understanding those challenges, and they push us toward a rethinking of the relationship between capital and labor, the waged and unwaged, and the employed and jobless.

TABLE OF CONTENTS
Cover
Title Page
Copyright Page
Contents
Introduction
Part I. Depressions and Working-Class Lives
1. Marching under Flags Black and Red: Toronto's Dispossessed in the Age of Industry Gaetan Heroux a
2. Working People's Responses to Past Depressions David Montgomery
3. Soviet Workers and Stalinist Terror: The Crisis of Industrialization Wendy Goldman
Part II. Economic Dislocation as Political Crisis
4. The Labor of Capitalism: Industrial Revolution and the Transformation of the Global Cotton-Growin
5. The Ordeal of Eugene Debs: The Panic of 1893, the Pullman Strike, and the Origins of the Progress
Part III. Social-Welfare Struggles from the Liberal to the Neoliberal State
6. Workers' Social-Wage Struggles during the Great Depression and the Era of Neoliberalism: Internat
7. Politics and Policies in the 1970s and Early Twenty-first Century: The Linked Recessions Judith S
8. Neoliberalism at Work in the Antipodean Welfare State in the Late Twentieth Century: Collusion, C
Part IV. Workers and the Shakeup of the New World Order
9. Want amidst Plenty: The Oil Boom and the Working Class in Newfoundland and Labrador, 1992-2010 Se
10. Whose Hard Times? Explaining Autoworkers Strike Waves in Recent-Day China Lu Zhang
11. Transformative Power: Lessons from the Greek Crisis and Beyond Hilary Wainwright
12. How Workers and the Government Have Dealt with Economic Crisis and Industrial Decline: 1929 and
Contributors
Index