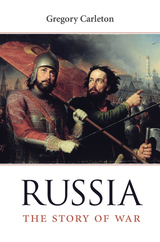 Outsiders view Russia as an aggressor, but Russians see themselves as surrounded by enemies, defensively fighting off invader after invader, or called upon by history to be the savior of Europe, or Christianity, or civilization itself, often at immense cost. As Gregory Carleton shows, war is the unifying thread of Russia’s national epic.