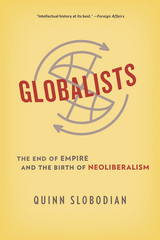 Neoliberals hate the state. Or do they? In the first intellectual history of neoliberal globalism, Quinn Slobodian follows a group of thinkers from the ashes of the Habsburg Empire to the creation of the World Trade Organization to show that neoliberalism emerged less to shrink government and abolish regulations than to redeploy them at a global level. It was a project that changed the world, but was also undermined time and again by the relentless change and social injustice that accompanied it.

“Slobodian’s lucidly written intellectual history traces the ideas of a group of Western thinkers who sought to create, against a backdrop of anarchy, globally applicable economic rules. Their attempt, it turns out, succeeded all too well.”
—Pankaj Mishra, Bloomberg Opinion

“Fascinating, innovative…Slobodian has underlined the profound conservatism of the first generation of neoliberals and their fundamental hostility to democracy.”
—Adam Tooze, Dissent

“The definitive history of neoliberalism as a political project.”
—Boston Review
REVIEWS
Well-executed, engaging, and important. This is by far the best book I have read on neoliberalism, ever.', Bruce Caldwell, Duke University

'Heraclitus warned us that ‘no man can stand in the same river twice, for it is not the same river,’ yet the temptation to do so is strong when it comes to the history of ideas. Viewing the liberalism of today as simply a return to earlier ideas is similarly tempting, but wrong. Slobodian’s investigation of how ‘Geneva school’ liberals sought to reinvent global liberalism so that capitalism could be made safe from democracy is a fundamental recasting of what modern liberalism is and from whence it came, forcing all of us who theorize on capitalism to rethink the very object of our study.', Mark Blyth, Brown University

'It’s a very important book that deserves to have a quite enormous impact.', Henry Farrell, Crooked Timber


TABLE OF CONTENTS
Cover
Title Page
Copyright
Dedication
Contents
List of Abbreviations
Introduction: Thinking in World Orders
1. A World of Walls
2. A World of Numbers
3. A World of Federations
4. A World of Rights
5. A World of Races
6. A World of Constitutions
7. A World of Signals
Conclusion: A World of People without a People
Notes
Acknowledgments
Index