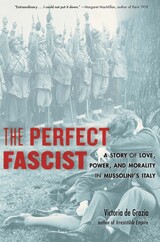 Through the story of one exemplary fascist—a war hero turned commander of Mussolini’s Black Shirts—the award-winning author of How Fascism Ruled Women reveals how the personal became political in the fascist quest for manhood and power.

When Attilio Teruzzi, Mussolini’s handsome political enforcer, married a striking young American opera star, his good fortune seemed settled. The wedding was a carefully stage-managed affair, capped with a blessing by Mussolini himself. Yet only three years later, after being promoted to commander of the Black Shirts, Teruzzi renounced his wife. In fascist Italy, a Catholic country with no divorce law, he could only dissolve the marriage by filing for an annulment through the medieval procedures of the Church Court. The proceedings took an ominous turn when Mussolini joined Hitler: Lilliana Teruzzi was Jewish, and fascist Italy would soon introduce its first race laws.

The Perfect Fascist pivots from the intimate story of an inconvenient marriage—brilliantly reconstructed through family letters and court records—to a riveting account of Mussolini’s rise and fall. It invites us to see in the vain, loyal, lecherous, and impetuous Attilio Teruzzi, a decorated military officer with few scruples and a penchant for parades, an exemplar of fascism’s New Man. Why did he abruptly discard the woman he had so eagerly courted? And why, when the time came to find another partner, did he choose another Jewish woman as his would-be wife? In Victoria de Grazia’s engrossing account, we see him vacillating between the will of his Duce and the dictates of his heart.

De Grazia’s landmark history captures the seductive appeal of fascism and shows us how, in his moral pieties and intimate betrayals, his violence and opportunism, Teruzzi is a forefather of the illiberal politicians of today.
TABLE OF CONTENTS
Cover
Title Page
Copyright
Dedication
Contents
Prologue
Part I: STRIVE
1. The Soldier
2. The Great War
3. Mutilated Victory
4. Enter the Diva
5. In Mussolini’s Camp
6. On the March
7. Little Man, What Now?
Part II: GRASP
8. Eros and Thanatos
9. Conquering the Ice Princess
10. A Fascist Wedding
11. Mission to Benghazi
12. Insurgency and Betrayal
13. A Matter of Honor
Part III: OVERREACH
14. To Kill a Marriage
15. Commanding the Blackshirts
16. In the Grip of the Inquisition
17. In War, Fullness
18. In Love, Tribulations
19. In Empire, Hollow Glory
Part IV: FALL
20. The Rout
21. Comeuppance
22. Last Man Standing
23. A Bearded Corpse
24. I Suffer and I Wait
25. Penance
Epilogue
Abbreviations for Notes
Notes
Acknowledgments
Index