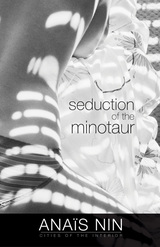 Seduction of the Minotaur
by Anaïs Nin
introduction by Anita Jarczok
Ohio University Press, 2014
Paper: 978-0-8040-1149-5
“Some voyages have their inception in the blueprint of a dream, some in the urgency of contradicting a dream. Lillian’s recurrent dream of a ship that could not reach the water, that sailed laboriously, pushed by her with great effort, through city streets, had determined her course toward the sea, as if she would give this ship, once and for all, its proper sea bed…. With her first swallow of air she inhaled a drug of forgetfulness well known to adventurers.”

Seduction of the Minotaur is the fifth and final volume of Anaïs Nin’s continuous novel known as Cities of the Interior. First published by Swallow Press in 1961, the story follows the travels of the protagonist Lillian through the tropics to a Mexican city loosely based on Acapulco, which Nin herself visited in 1947 and described in the fifth volume of her Diary. As Lillian seeks the warmth and sensuality of this lush and intriguing city, she travels inward as well, learning that to free herself she must free the “monster” that has been confined in a labyrinth of her subconscious.

This new Swallow Press edition includes an introduction by Anita Jarczok, author of Inventing Anaïs Nin: Celebrity Authorship and the Creation of an Icon.

Swallow Press publishes all five volumes that make up Cities of the Interior: Ladders to Fire, Children of the Albatross, The Four-Chambered Heart, A Spy in the House of Love, and Seduction of the Minotaur.
AUTHOR BIOGRAPHY
Anaïs Nin (1903–1977) remains an iconic literary figure and one of the most notable experimental writers of the twentieth century. As one of the first women to explore female erotica, Nin revealed the inner desires of her characters in a way that made her works a touchstone for later feminist writers. Swallow Press currently publishes sixteen other titles by or about Anaïs Nin.