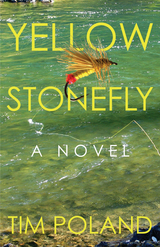 In her day job as a nurse, Sandy Holston cares for the elderly and the sick, even as she is haunted by her own questionable past and the deaths that marked it. Her true self resides among the mountain trout streams of her Appalachian home, where she wields her fly rod with uncanny accuracy as her life plays out along a tight line between herself and a fish on the other end.

But then the Ripshin River threatens to flood. Sandy can no longer deny that dementia has taken hold in James Keefe, her older sometimes-lover. An elusive eastern mountain lion appears. And when a predatory survivalist keeping a solitary camp by the headwaters arrives, he poses the biggest threat of all. His merciless pursuit of the lion brings him ever closer to Sandy, triggering her final, tragic attempt to preserve her connections with Keefe, the headwaters, and all that she has, at last, come to love.

In Yellow Stonefly—a rare fly fishing novel with a female protagonist—Tim Poland weaves suspense and introspection into an unforgettable read, at once mournful and bracing.

Tim Poland lives near the Blue Ridge Mountains in southwestern Virginia, where he is professor emeritus of English at Radford University. His fiction, poetry, and nonfiction have appeared widely in various literary magazines, and he is the author of the novel The Safety of Deeper Water.