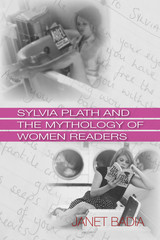 Sylvia Plath and the Mythology of Women Readers
by Janet Badia
University of Massachusetts Press
eISBN: 978-1-61376-252-3
Depicted in popular films, television series, novels, poems, and countless media reports, Sylvia Plath’s women readers have become nearly as legendary as Plath herself, in large part because the depictions are seldom kind. If one is to believe the narrative told by literary and popular culture, Plath’s primary audience is a body of young, misguided women who uncritically—even pathologically—consume Plath’s writing with no awareness of how they harm the author’s reputation in the process. Janet Badia investigates the evolution of this narrative, tracing its origins, exposing the gaps and elisions that have defined it, and identifying it as a bullying mythology whose roots lie in a long history of ungenerous, if not outright misogynistic, rhetoric about women readers that has gathered new energy from the backlash against contemporary feminism. More than just an exposé of our cultural biases against women readers, Badia’s research also reveals how this mythology has shaped the production, reception, and evaluation of Plath’s body of writing, affecting everything from the Hughes family’s management of Plath’s writings to the direction of Plath scholarship today. Badia discusses a wide range of texts and issues whose significance has gone largely unnoticed, including the many book reviews that have been written about Plath’s publications; films and television shows that depict young Plath readers; editorials and fan tributes written about Plath; and Ted and (daughter) Frieda Hughes’s writings about Plath’s estate and audience.
AUTHOR BIOGRAPHY
Janet Badia is associate professor and director of women’s studies at Indiana University–Purdue University Fort Wayne and coeditor of Reading Women: Literary Figures and Cultural Icons from the Victorian Age to the Present. Become a Fan on Facebook: https://www.facebook.com/PlathandWomenReaders
REVIEWS
-- Susan Rosenbaum, author of Professing Sincerity: Modern Lyric Poetry, Commercial Culture, and the Crisis in Reading


-- Lynda Bundtzen, author of The Other Ariel