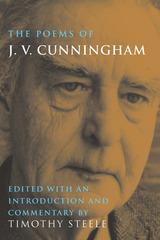 The lifework in verse of one of the century’s finest and liveliest American poets, this collection of the poems of J. V. Cunningham (1911-85) documents the poet’s development from his early days as an experimental modernist during the Depression to his emergence as the master of the classical “plain style”—distinguished by its wit, feeling, and subtlety.

Often identified with the epigram—a genre in which he excelled as distinctively as Jonson, Herrick, and Landor—Cunningham also wrote in a wide range of other poetic forms and was a remarkable translator. This collection, designed to show the poet’s range and skill, incorporates the materials of his 1971 Collected Poems and Epigrams and restores their original arrangement. It also adds many of his later poems and translations and some uncollected pieces from his periodicals.

Timothy Steele’s notes and introduction assist in re-establishing Cunningham’s position as a twentieth-century original, a poet who is remembered equally for emotional power and stylistic purity.

Timothy Steele’s previous collections of poetry include The Color Wheel and Sapphics and Uncertainties: Poems 1970–1986. He has also published two widely discussed works of literary criticism, Missing Measures: Modern Poetry and the Revolt against Meter and All the Fun’s in How You Say a Thing: An Explanation of Meter and Versification. He is a professor of English at California State University, Los Angeles. For more information, visit his website.