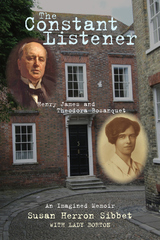 In 1907, in a quiet English village, Theodora Bosanquet answered Henry James’s call for someone to transcribe his edits and additions to his formidable body of work. The aging James had agreed to revise his novels and tales into the twenty-four-volume New York Edition. Enter Bosanquet, a budding writer who would record the dictated revisions and the prefaces that would become a lynchpin of his legacy.

Embracing the role of amanuensis and creative counterpoint cautiously at first, Bosanquet kept a daily diary over the nine years that she worked with James, as their extraordinary partnership evolved. Bosanquet became the first audience for James’s compositions and his closest literary associate—and their relationship ultimately resulted in James’s famed “deathbed dictations.” At the same time, the homosexuality of each was an unspoken but important influence on their mutual support and companionship.

Susan Herron Sibbet’s posthumous novel gifts us with the voice of a young woman writer drawn into the intimate circle of an aging master, and is a moving addition to previous literary treatments of James and Bosanquet, even as it hews closer to fact than other works do. The Constant Listener is itself the work of an accomplished poet, and will speak to fans of James, historical fiction, and themes of art, love, sexuality, and identity.

Susan Herron Sibbet (1942–2013) was active in California Poets in the Schools for twenty-five years and a cofounder of Sixteen Rivers Press. Sibbet published five poetry collections, including Burnt Toast and Other Recipes, No Easy Light, and the posthumous Great Blue.