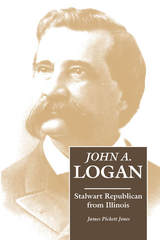 “A splendid witness in 'Reds' looked out at her audience and said, 'If men really wanted to end war, they would have done it long ago.' James P. Jones in Black Jack: John A. Logan and Southern Illinois in the Civil War Era, an account of the Civil War general, and now with his John A. Logan: Stalwart Republican from Illinois, which tells Logan's postwar story, makes the witness’s point perfectly. There cannot have been a day in which the energetic Logan did not remember what a gorgeous, swashbuckling figure he had been when at war. If we are ever going to get over kidding ourselves that we Americans are all peace-loving people, we have to start confronting works of the caliber of Jones’s well-researched and provocative books.”—William S. McFeely, author of Frederick Douglass and Grant: A Biography

“A fitting sequel to Jones’s first volume on Logan, an important late-nineteenth-century figure. His story is an important one, and Jones tells it clearly and well. In research it is impeccable, particularly in its skillful use of newspapers and manuscript collections, which are the main sources for any study of Logan.

“In the ‘new’ tradition of Gilded Age historiography, Jones takes Logan seriously and reaches balanced conclusions about the senator and his era. Logan warrants such a treatment. His postbellum career tells us a great deal about Reconstruction, regional and national Republican party politics, military policies, developing tariff policies, the 1884 presidential race, and a host of other matters. The fascinating story of the 1885 Illinois senatorial election is alone worth the price of admission.”

—R. Hal Williams, author of Years of Decision: American Politics in the 1890s

TABLE OF CONTENTS
Cover
Frontispiece
Title Page
Dedication
Contents
List of Illustrations
Acknowledgments
Preface
1. Radical Reinforcement
2. Steering the Boat
3. Scourge of the Regular Army
4. "A High Place in the World "
5. The Senator Stands for Grant
6. The Paper Money Trinity
7. The Organization Is Defeated
8. "The Fiery Furnace"
9. Return of the Stalwart
10. The Immortal 306
11. A Hornet's Nest in the Senate
12. A Household Word
13. Logan for President
14. Plumed Knight and Black Eagle
15. The Logan Machine and the " Still Hunt"
16. The Last Snowfall
Notes
Bibliography
Index
Shawnee Classics: A Series of Classic Regional Reprints for the Midwest
Back Cover