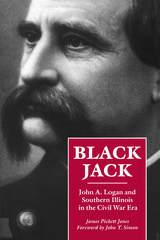 John A. Logan, called "Black Jack" by the men he led in Civil War battles from the Henry-Donelson campaign to Vicksburg, Chattanooga, and on to Atlanta, was one of the Union Army’s most colorful generals.

James Pickett Jones places Logan in his southern Illinois surroundings as he examines the role of the political soldier in the Civil War. When Logan altered his stance on national issues, so did the southern part of the state. Although secession, civil strife, Copperheadism, and the new attitudes created by the war contributed to this change of position in southern Illinois, Logan’s role as political and military leader was important in the region’s swing to strong support of the war against the Confederacy, to the policies of Lincoln, and eventually, to the Republican party.

“Jones produces almost a day-by-day account of Logan’s activities both political and military during the war. But the book is more than a chronology of Logan’s life during this period. Unlike some one-sided cam­paign biographies of Logan that were published at that time, Jones’ volume gives a fairly objective account of how the soldier and the politician were interwoven in this charismatic and complicated individual.”—South­ern Illinoisan