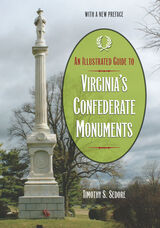 From well-known battlefields, such as Manassas, Fredericksburg, and Appomattox, to lesser-known sites, such as Sinking Spring Cemetery and Rude’s Hill, Sedore leads readers on a vivid journey through Virginia’s Confederate history. Tablets, monoliths, courthouses, cemeteries, town squares, battlefields, and more are cataloged in detail and accompanied by photographs and meticulous commentary. Each entry contains descriptions, fascinating historical information, and location, providing a complete portrait of each site.

Much more than a visual tapestry or a tourist’s handbook, An Illustrated Guide to Virginia’s Confederate Monuments draws on scholarly and field research to reveal these sites as public efforts to reconcile mourning with Southern postwar ideologies. Sedore analyzes in depth the nature of these attempts to publicly explain Virginia’s sense of grief after the war, delving deep into the psychology of a traumatized area. From commemorations of famous generals to memories of unknown soldiers, the dead speak from the pages of this sweeping companion to history.
AUTHOR BIOGRAPHY
Timothy S. Sedore is a professor of English at The City University of New York, Bronx Community College. He regularly teaches undergraduate courses in composition, literature, and religious rhetoric. He was ordained to the ministry by the Ordination Council of the Southwest Baptist Association of the Commonwealth of Virginia and is active in campus ministries and preaching engagements. His works, Tennessee Civil War Monuments: The Illustrated Field Guide and Mississippi Civil War Monuments: The Illustrated Field Guide, are in progress for publication.
REVIEWS

When the Civil War’s guns fell silent in the spring of 1865, the states that comprised the former Confederacy began the process of recovering from four years of hard war — a conflict that killed or debilitated nearly one quarter of the South’s white male population between the ages of 16 and 45.

Although people did their best to recover and move forward, the survivors of the Confederacy refused to let the sacrifices of the slain go without proper recognition.

That effort to memorialize Virginia’s involvement in the war provides the basis for Timothy Sedore’s invaluable guide to the commonwealth’s Confederate monuments.

Relying on the monuments as historical artifacts as well as other supporting primary materials, Sedore provides a comprehensive guide, the first such publication of its kind, to the 360 Confederate markers and monuments in Virginia.

He starts with a cogently crafted and insightful introduction that offers a brief history of memorialization after the Civil War. Then he breaks the book into five regional chapters in which he examines the monuments by county.

Sedore employs a superb template to make sense of such a vast array of monuments spread over nearly 40,000 square miles. Each chapter includes a finely detailed map that delineates the location of each monument in its region and an introductory synopsis of the region’s experience during the conflict.

In Sedore’s discussion of each monument, he provides the precise location, a description of the monument and the material used to construct it, and a verbatim copy of the inscription.

He also includes excerpts from dedication addresses, which increase this volume’s usefulness. Historians interested in the rhetoric of the Lost Cause or the campaign for national reconciliation will find these primary documents most useful.

The selected primary materials illustrate how former Confederates made sense of their failed experiment and justified the Confederacy to future generations of Americans.

Sedore’s book also is a splendid reminder of the importance of language in historical remembrance. Analysis throughout this book informs readers that the Confederate veterans and organizations who erected Confederate monuments in Virginia, as was the case across the entire South, chose their words carefully.

These former Confederates knew that although the bronze and marble would stand still for future generations, the words inscribed on them would cut across time to teach forthcoming descendants about the conflict and the importance of human sacrifice for a cause — even a doomed one.

This volume, which is soundly researched, impeccably organized, and eloquently written, should appeal to a wide range of Civil War readers, especially those interested in Confederate history, Virginia’s place in the conflict and Civil War memory.