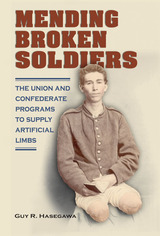 The four years of the Civil War saw bloodshed on a scale unprecedented in the history of the United States. Thousands of soldiers and sailors from both sides who survived the horrors of the war faced hardship for the rest of their lives as amputees. Now Guy R. Hasegawa presents the first volume to explore the wartime provisions made for amputees in need of artificial limbs—programs that, while they revealed stark differences between the resources and capabilities of the North and the South, were the forebears of modern government efforts to assist in the rehabilitation of wounded service members.

Hasegawa draws upon numerous sources of archival information to offer a comprehensive look at the artificial limb industry as a whole, including accounts of the ingenious designs employed by manufacturers and the rapid advancement of medical technology during the Civil War; illustrations and photographs of period prosthetics; and in-depth examinations of the companies that manufactured limbs for soldiers and bid for contracts, including at least one still in existence today. An intriguing account of innovation, determination, humanitarianism, and the devastating toll of battle, Mending Broken Soldiers shares the never-before-told story of the artificial-limb industry of the Civil War and provides a fascinating glimpse into groundbreaking military health programs during the most tumultuous years in American history.