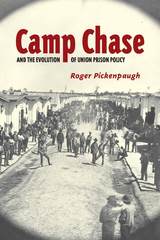 Discusses an important yet often misunderstood topic in American history

Camp Chase, located four miles west of Columbus, Ohio, started, as did so many other prisons, as a training camp for eager Union recruits. By late 1861 it was also housing Confederate prisoners. It was also used as quarters for Union soldiers who had been taken prisoner by the Confederacy and released on parole or exchanged. During the four years of the war, Camp Chase developed as a prison camp, reflecting the efforts of both civilian and military officials to fashion a coherent prison policy.

Camp Chase and the Evolution of Union Prison Policy is a careful, thorough, and objective examination of the history and administration of the camp and is of true significance in the literature on the Civil War.
AUTHOR BIOGRAPHY
Roger Pickenpaugh is retired history teacher. He is the author of Captives in Gray: The Civil War Prisons of the Union and Captives in Blue: The Civil War Prisons of the Confederacy.
TABLE OF CONTENTS