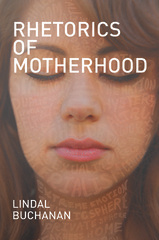 Becoming a mother profoundly alters one’s perception of the world, as Lindal Buchanan learned firsthand when she gave birth. Suddenly attentive to representations of mothers and mothering in advertisements, fiction, film, art, education, and politics, she became intrigued by the persuasive force of the concept of motherhood, an interest that unleashed a host of questions: How is the construct defined? How are maternal appeals crafted, presented, and performed? What do they communicate about gender and power? How do they affect women? Her quest for answers has produced Rhetorics of Motherhood, the first book-length consideration of the topic through a feminist rhetorical lens.

Although both male and female rhetors employ motherhood to promote themselves and their agendas, Buchanan argues it is particularly slippery terrain for women—on the one hand, affording them authority and credibility but, on the other, positioning them disadvantageously within the gendered status quo. Rhetorics of Motherhood investigates that paradox by detailing the cultural construction and performance of the Mother in American public discourse, tracing its use and impact in three case studies, and by theorizing how, when, and why maternal discourses work to women’s benefit or detriment. In the process, the reader encounters a fascinating array of issues—including birth control, civil rights, and abortion—and rhetors, ranging from Diane Nash and Margaret Sanger to Sarah Palin and Michelle Obama.

As Buchanan makes clear, motherhood is a rich site for investigating the interrelationships among gender, power, and public discourse. Her latest book contributes to the discipline of rhetoric by attending to and making a convincing case for the significance of this understudied subject. With its examination of timely controversies, contemporary and historical figures, and powerful women, Rhetorics of Motherhood will appeal to a wide array of readers in rhetoric, communications, American studies, women’s studies, and beyond.

Lindal Buchanan is assistant professor of English and women's studies at Old Dominion University. She is the author of Regendering Delivery: The Fifth Canon and Antebellum Women Rhetors (SIU Press, 2005) and coeditor of Walking and Talking Feminist Rhetorics: Landmark Essays and Controversies.