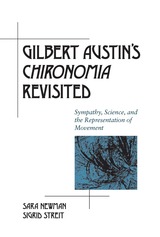 This first book-length study of Irish educator, clergyman, and author Gilbert Austin as an elocutionary rhetor investigates how his work informs contemporary scholarship on delivery, rhetorical history and theory, and embodied communication. Authors Sara Newman and Sigrid Streit study Austin’s theoretical system, outlined in his 1806 book Chironomia; or A Treatise on Rhetorical Delivery—an innovative study of gestures as a viable, independent language—and consider how Austin’s efforts to incorporate movement and integrate texts and images intersect with present-day interdisciplinary studies of embodiment.

Austin did not simply categorize gesture mechanically, separating delivery from rhetoric and the discipline’s overall goals, but instead he provided a theoretical framework of written descriptions and illustrations that positions delivery as central to effective rhetoric and civic interactions. Balancing the variable physical elements of human interactions as well as the demands of communication, Austin’s system fortuitously anticipated contemporary inquiries into embodied and nonverbal communication. Enlightenment rhetoricians, scientists, and physicians relied on sympathy and its attendant vivacious and lively ideas to convey feelings and facts to their varied audiences. During the seventeenth and eighteenth-centuries, as these disciplines formed increasingly distinct, specialized boundaries, they repurposed existing, shared communication conventions to new ends. While the emerging standards necessarily diverged, each was grounded in the subjective, embodied bedrock of the sympathetic, magical tradition.

AUTHOR BIOGRAPHY
Sara Newman is an emeritus professor of English at Kent State University and the author of Writing Disability: A Critical History.

Sigrid Streit is an assistant professor of English and the director of writing across the curriculum at the University of Detroit Mercy. She has published research in the International Journal of Interdisciplinary Social Sciences. This is her first book.

Chapter 1. Austin and Elocution in Context
A Brief History of Delivery
The Scientific Method versus the Sympathetic Message
Sympathy Represents Science and Medicine Sympathy and Language Debated
Science and Sympathy
Rhetorical Sympathy Revisited
The Split
Chapter Outline and Conclusions

Chapter 6. Beyond Chironomia: Movement as Actio
The Future of Notational Systems
What Is a Gesture?
Body Language and Ethos
Embodied Technology and Ethos
Conclusions