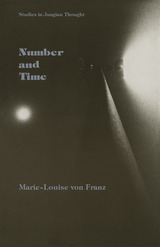 BUY
Number and Time: Reflections Leading Toward a Unification of Depth Psychology and Physics
by Marie-Louise Von Franz and Ernst Klett Verlag
translated by Andrea Dykes
Northwestern University Press, 1974
Paper: 978-0-8101-0532-4
C. G. Jung's work in his later years suggested that the seemingly divergent sciences of psychology and modern physics might, in fact, be approaching a unified world model in which the dualism of matter and psyche would be resolved. Jung believed that the natural integers are the archetypal patterns that regulate the unitary realm of psyche and matter, and that number serves as a special instrument for man's becoming conscious of this unity.

Writen in a clear style and replete with illustrations which help make the mathematical ideas visible, Number and Time is a piece of original scholarship which introduces a view of how "mind" connects with "matter" at the most fundamental level.
TABLE OF CONTENTS