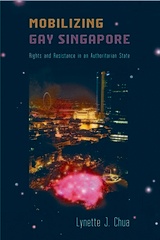 For decades, Singapore's gay activists have sought equality and justice in a state where law is used to stifle basic civil and political liberties. In her groundbreaking book, Mobilizing Gay Singapore, Lynette Chua asks, what does a social movement look like in an authoritarian state? She takes an expansive view of the gay movement to examine its emergence, development, strategies, and tactics, as well as the roles of law and rights in social processes.

Mobilizing Gay Singapore also addresses how these brave, locally engaged citizens come out into the open as gay activists and expand and diversify their efforts in the global queer political movement.

Lynette J. Chua is Assistant Professor of Law at the National University of Singapore.