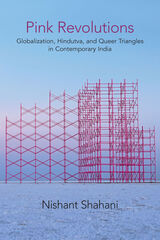 Pink Revolutions describes how queer politics in India occupies an uneasy position between the forces of neoliberal globalization, on the one hand, and the nationalist Hindu fundamentalism that has emerged since the 1990s, on the other. While neoliberal forces use queerness to highlight India’s democratic credentials and stature within a globalized world, nationalist voices claim that queer movements in the country pose a threat to Indian national identity. Nishant Shahani argues that this tension implicates queer politics within messy entanglements and knotted ideological triangulations, geometries of power in which local understandings of “authentic” nationalism brush up against global agendas of multinational capital.

Eschewing structures of absolute complicity or abject alterity, Pink Revolutions pays attention to the logics of triangulation in various contexts: gay tourism, university campus politics, diasporic cultural productions, and AIDS activism. The book articulates a framework through which queer politics can challenge rather than participate in neoliberal imperatives, an approach that will interest scholars engaged with queer studies and postcolonial scholarship, as well as activists and academics wrestling with global capitalism and right-wing regimes around the world.

AUTHOR BIOGRAPHY
NISHANT SHAHANI is an associate professor in the Program in Women’s, Gender, and Sexuality Studies and the Department of English at Washington State University. He is the author of Queer Retrosexualities: The Politics of Reparative Return and a coeditor of AIDS and the Distribution of Crises.
TABLE OF CONTENTS


Acknowledgements
Introduction: “This is not the Morning we were Waiting for”: Theorizing Pink Revolutions
1. “Revolutionary” Reform, Reformist “Revolution”
2. Safe in the City: Gay Tourism in India and the Politics of Worlding
3. Queer Privacy during Seditious Times: Re-Touching the Case of Ramchandra Siras
4. Patently Queer: The Late Effects of Illness During Revolutionary Times
5. Beyond the Banyan Tree: Diasporic Mobility in Passages Away from India
Afterword: A Delayed Postscript
Notes
Bibliography
Index