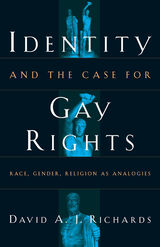 How should we chart a course toward legal recognition of gay rights as basic human rights? In this enlightening study, legal scholar David Richards explores the connections between gay rights and three successful civil rights movements—black civil rights, feminism, and religious toleration—to determine how these might serve as analogies for the gay rights movement.

Richards argues that racial and gender struggles are informative but partial models. As in these movements, achieving gay rights requires eliminating unjust stereotypes and allowing one's identity to develop free from intolerant views. Richards stresses, however, that gay identity is an ethical choice based on gender equality. Thus the right to religious freedom offers the most compelling analogy for a gay rights movement because gay identity should be protected legally as an ethical decision of conscience.

A thoughtful and highly original voice in the struggle for gay rights, David Richards is the first to argue that discrimination is like religious intolerance-denial of full humanity to individuals because of their identity and moral commitments to gender equality.
TABLE OF CONTENTS


Acknowledgments
Introduction
1. The Racial Analogy
2. The Gender Analogy
The Analogy between Race and Gender
The Analogy between Gender and Sexual Orientation
3. The Religious Analogy
Anti-Lesbian/Gay Initiatives
Exclusion from the Military
Same-Sex Marriage
4. Identity and Justice
Bibliography
Index