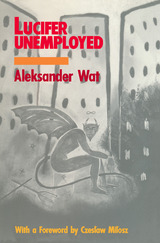 In these nine stories the Polish writer Aleksander Wat consistently turns history on its ear in comic reversals reverberating with futurist rhythms and the gently mocking humor of despair. Wat inverts the conventions of religion, politics, and culture to fantastic effect, illuminating the anarchic conditions of existence in interwar Europe.

The title story finds a superbly ironic Lucifer wandering the Europe of the late 1920s in search of a mission: what impact can a devil have in a godless time? What is his sorcery in a society far more diablical than the devil himself? Too idealistic for a world full of modern cruelties, the unemployable Lucifer finally finds the only means of guaranteed immortality. In "The Eternally Wandering Jew," steady Jewish conversion to Christianity results in Nathan the Talmudist reigning as Pope Urban IX. The hilarious satire on power, "Kings in Exile," unfolds with the dethroned monarchs of Europe meeting to found their own republic in an uninhabited island in the Indian Ocean.
AUTHOR BIOGRAPHY

Aleksander Wat, (born Aleksander Chwat) (1 May 1900 – 29 July 1967) was a Polish poet, writer and art theoretician, one of the precursors of Polish futurism movement in early 1920s.

Czeslaw Milosz received the Nobel Prize in literature in 1980.

Lillian vallee is the translator of the three-volume Diary of Witold Gombrowicz.