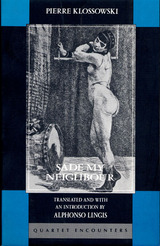 Enlightenment ideals of a society rooted in liberationist reason and morality were trampled in the wake of the savagery of the Second World War. That era's union of cold technology and ancient hatreds gave rise to a dark, alternative reason—an ethic that was value-free and indifferent with regard to virtue and vice, freedom, and slavery. In a world where "the unthinkable" had become reality, it is small wonder that theorists would turn to the writings of a man whose eighteenth-century imagination preceded twentieth-century history in its unbridled exploration of viciousness, perversion, and monstrosity: the Marquis de Sade.