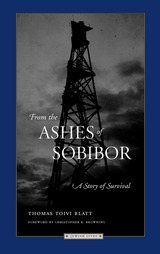 From the Ashes of Sobibor: A Story of Survival
by Thomas Toivi Blatt
foreword by Christopher R. Browning
Northwestern University Press, 1997
Paper: 978-0-8101-1302-2
From the Ashes of Sobibor: A Story of Survival is an invaluable, firsthand account of a child's survival in a Nazi concentration camp in Poland during World War II. When the Germans invaded Poland on September 1, 1939, Thomas Toivi Blatt was twelve years old. He and his family lived in the largely Jewish town of Izbica in the Lublin district of Poland—the district that was to become the site of three major Nazi extermination camps: Belzec, Sobibor, and Majdanek. Blatt tells of the chilling events that led to his deportation to Sobibor, and of the six months he spent there before taking part in the now-famous uprising and mass breakout. Blatt's tale of escape, and of the five harrowing years spent eluding both the Nazis and anti-Semitic Polish nationalists, is gripping account of resilience and survival.

This edition also includes the author's interview with Karl Frenzel, a former Nazi commandant at Sobibor.
AUTHOR BIOGRAPHY
THOMAS "TOIVI" BLATT (1927–2015) was one of the few survivors who successfully escaped Sobibor extermination camp. While fleeing the SS he was betrayed by a farmer who was hiding him, resulting in a gunshot injury to the jaw.
REVIEWS
"One of the era's true sagas." —Jerusalem Post Magazine
— -