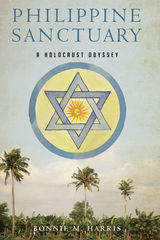 During World War II, the United States government and many Western democracies limited or closed themselves off entirely to Jewish refugees. By contrast, a Pacific island nation decided to keep its doors open. Between 1938 and 1941, the Philippine Commonwealth provided safe asylum to more than 1,300 German Jews. In highlighting the efforts by Philippine president Manual Quezon and High Commissioner Paul V. McNutt, Bonnie M. Harris offers fuller implications for our understanding of the Roosevelt administration's response to the Holocaust.
This untold history is brought to life by focusing on the incredible journey of synagogue cantor Joseph Cysner. Drawing from oral histories, memoirs, and personal papers, Harris documents Cysner's harrowing escape from the Nazis and his heroic rescue by the American-led Jewish community of the Philippines in 1939. Moving and rich in historical detail, Philippine Sanctuary reveals new insights for an overlooked period in our recent history, and emphasizes the continued importance of humanitarian efforts to aid those being persecuted.
AUTHOR BIOGRAPHY
Bonnie M. Harris is a lecturer at San Diego State University and an associate producer for the documentary An Open Door: Holocaust Haven in the Philippines.
TABLE OF CONTENTS