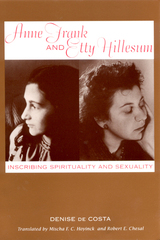 Studies of Nazi persecution and destruction of Jews have to date largely been based on the accounts of men. And yet gender difference in Western society is so profound that women and men seem to have divergent experiences, speak different languages, and see and hear in dissimilar ways. Denise de Costa's book explores the significance of sex and gender differences in the construction of history and society-specifically, the Nazi genocide of Jews in World War II-by focusing on the writing of two Jewish women, Anne Frank and Etty Hillesum.

De Costa argues that although both of these writers have received much attention, little has been done to understand how the significant difference occasioned by both gender and Jewishness helps to define cultural or personal identity in relation to the Holocaust. De Costa uses a variety of psychoanalytic and feminist theories to approach the writing of Frank and Hillesum. Critiquing as well as employing the concepts of Julia Kristeva, Hélène Cixous, Luce Irigaray, and Simone de Beauvoir among others, she presents a detailed and rich discussion of each writer.

De Costa approaches Anne Frank largely from a psychoanalytical perspective that emphasizes the function of writing itself in the development of self-identity. For Etty Hillesum, she is more concerned with how writing establishes a philosophy, and a faith, that can entertain and is indeed based in doubleness and paradox. Her assessment of these two writers makes a significant contribution to our understanding of the Holocaust as a cultural and historical phenomenon, of the role of writing in the production and expression of gendered identity, and of the complex relation between women, writing, and culture.

AUTHOR BIOGRAPHY
DENISE DE COSTA is a researcher at the University for Humanist Studies in Utrecht. She is author of Silences That Speak: A Postmodern Reading of Feminine Writing. Irigaray, Kristeva, Lyotard