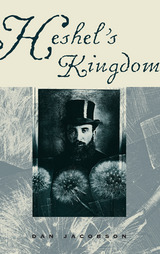 The Orthodox rabbi Heshel Melamed's sudden death by heart attack in 1919 set his widow and children free to leave Lithuania. In this deeply personal memoir, his grandson journeys to the nation after the fall of Communism, and his story is both a philosophical tableau of secularism, religion, and family and a communion with history's darkness-and, where possible, its illumination.
AUTHOR BIOGRAPHY
Jacobson grew up in Kimberley, South Africa, but has lived in London for most of his adult life. He is a Professor Emeritus in English at University College, London.
REVIEWS
"Dan Jacobson's Heshel's Kingdom is a marvelously sensitive, observant, scrupulously honest and intensely autobiographical account [of a journey]."
--Times Literary Supplement


"A seamless and tautly written narrative. . . . What we are finally left with is neither a history lesson nor a neatly unfolding drama but simply--not so very simply--an experience which has been lived through, more fully understood than it could ever have been from the outside, and transmuted, thanks to the quality of the writing, into a work of art."
--Daily Telegraph