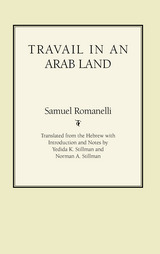 Samuel Romanelli was a free spirit, a son of the Enlightenment, who spend most of his life travelling in search of adventure, knowledge, and patrons for his literary endeavors. By the early 1780s, Romanelli had travelled from his homeland to England and established himself among the Maskilim, or Jews of the Enlightenment, and patrons of Hebrew culture. Fluent in ten languages, he was a poet and translator of classical and contemporary literature into Hebrew, and apparently he earned a good living.

During a return voyage to Italy in 1786, he became stranded in Gibraltar for an extended time which depleted his funds, and his economic circumstances forced him to join a merchant travelling to Morocco. Through misadventure in Morocco, he lost his passport and was retained in that country for four years, the story of which forms Travail in an Arab Land, first published in 1792 in Berlin. The book is a firsthand account of the author’s adventures during the four years he was stranded in Sharifan Morocco between 1787 and 1790.
AUTHOR BIOGRAPHY
Yedida K. Stillman is Associate Professor of Classical and Near Eastern Studies and Director of the Judaic Studies Program, State University of New York at Binghamton. Norman A. Stillman is Professor of History and Arabic at the State University of New York at Binghamton.
TABLE OF CONTENTS