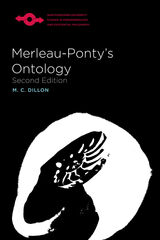 Merleau-Ponty's Ontology: Second Edition
by M. C. Dillon
Northwestern University Press, 1997
Paper: 978-0-8101-1528-6
Originally published in 1988, M.C. Dillon's classic study of Merleau-Ponty is now available in a revised second edition containing a new preface and a new chapter on "Truth in Art." Dillon's thesis is that Merleau-Ponty has developed the first genuine alternative to ontological dualism seen in Western philosophy. From his early work on the philosophical significance of the human body to his later ontology of flesh, Merleau-Ponty shows that the perennial problems growing out of dualistic conceptions of mind and body, subject and object, immanence and transcendence can be resolved within the framework of a new way of thinking based on the exemplar of the worldly embodiment of thought.
AUTHOR BIOGRAPHY
M.C. DILLON was Distinguished Teaching Professor of Philosophy at Binghamton University. His publicaions include Merleau-Ponty Vivant, Semiological Reductionism: A Critique of the Deconstructionist Movement in Postmodern Thought, Écart and Différance: Merleau-Ponty and Derrida on Seeing and Writing, and mroe than fifty journal raticles, many of which are devoted to Merleau-Ponty scholarship.
TABLE OF CONTENTS

Part One—Antecedents and Consequences
One. The Cartesian Origins of Empiricism and Intellectualism
Two. The Paradox of Immanence and Transcendence
Three. The Thesis of the Primacy of Perception
Four. Ontological Implications of Gestalt Theory

Part Three—The Explicit Ontology of The Visible and the Invisible
Nine. The Reversibility Thesis
Ten. Language: Foundation and Truth