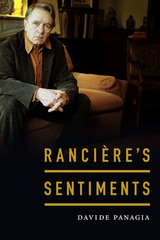 In Rancière’s Sentiments Davide Panagia explores Jacques Rancière’s aesthetics of politics as it informs his radical democratic theory of participation. Attending to diverse practices of everyday living and doing—of form, style, and scenography—in Rancière’s writings, Panagia characterizes Rancière as a sentimental thinker for whom the aesthetic is indistinguishable from the political. Rather than providing prescriptions for political judgment and action, Rancière focuses on how sensibilities and perceptions constitute dynamic relations between persons and the worlds they create. Panagia traces this approach by examining Rancière’s modernist sensibilities, his theory of radical mediation, the influence of Gustave Flaubert on Rancière’s literary voice, and how Rancière juxtaposes seemingly incompatible objects and phenomena to create moments of sensorial disorientation. The power of Rancière’s work, Panagia demonstrates, lies in its ability to leave readers with a disjunctive sensibility of the world and what political thinking is and can be.
AUTHOR BIOGRAPHY
Davide Panagia is Associate Professor of Political Science at the University of California, Los Angeles and the author of The Political Life of Sensation and The Poetics of Political Thinking, both also published by Duke University Press, as well as Ten Theses for an Aesthetics of Politics.
REVIEWS
-- L. A. Wilkinson Choice