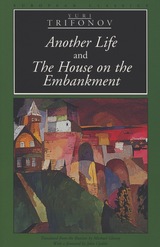 Northwestern University Press, 1999
Paper: 978-0-8101-1570-5
Widely regarded as a major writer of his generation, Yuri Trifonov tolerated attack and admiration in the Soviet Union. His novellas are celebrated as being in the tradition of great nineteenth-century Russian writing. In "Another Life," a woman suddenly widowed attempts to grasp the memory of her brilliant, erratic husband, and to understand their life together. "The House on the Embankment" is the story of an academic opportunist who rises to apparatchik but suffers the oppression of society, friends, and most of all his inability to make decisions.
AUTHOR BIOGRAPHY
Yuri Trifonov (1925 -- 81) is widely regarded as a major Russian writer of his generation. His literary career started early--he was published at twnety-two, and his novel Students won the 1951 Stalin Prize--but he spent much of the Thaw under Khrushchev in the state archives seeking to rehabilitate the memory of his father, who disappeared in the Great Purge of 1937 and was expunged from Party history. In the 1960s he began the series of works--"The Exchange," Taking Stock, The Long Goodbye, Another Life, and The House on the Embankment--that brought him both attack and admiration in the Soviet Union, as well as an international reputation as an artist of the first rank. His Disappearance and Old Man are also available from Northwestern University Press.

Michael Glenny is a widely published author, editor, and translator. Among his translated works are Vladimir Nabokov's Mary: A Novel and numerous books by Mikhail Bulgakov, including the Everyman library edition of The Master and Margarita.
TABLE OF CONTENTS

The House on the Embankment