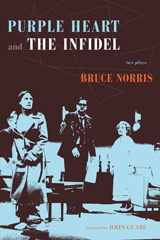 Purple Heart and The Infidel: Two Plays
by Bruce Norris
foreword by John Guare
Northwestern University Press, 2005
Paper: 978-0-8101-2214-7
In Purple Heart, Carla, a Vietnam War widow deep in drink and depression, is living with a troubled son and her controlling mother. One day a stranger arrives at the door, a soldier with one hand who is seemingly connected to her late husband and comes to offer condolences to the grieving family. The soldier's mysterious visit is solved in graphic and bloody detail at the end of the play. Norris uses these quirky and flawed characters to provide a humorous yet very dark view of war and the human condition.

Loosely based on a true story, The Infidel tells of a charismatic and well-respected state Supreme Court justice who is faced with disciplinary action after his out-of-control affair with a young Latina junior staffer. He confers with his friend and attorney as he examines the consequences of his behavior and tries to judge the most difficult case of his life-his own. With dark irony and sharp, cutting dialogue, Bruce Norris explores sexual obsession and the legislation of human behavior.
AUTHOR BIOGRAPHY
Bruce Norris is an actor and playwright. His plays Purple Heart, The Infidel, and We All Went Down to Amsterdam, winner of a Jeff Award for Best New Work,have been produced by Steppenwolf Theatre. His play The Vanishing Twin and his adaptation of Joe Orton's Up Against It have been produced at Lookingglass Theatre. As an actor, Norris can be seen in the films A Civil Action, The Sixth Sense, and School of Rock, among others. He currently lives in Brooklyn, New York.
REVIEWS

"Had Henrik Ibsen been around to chronicle the age of 'The Brady Bunch'-those far-from-halcyon days of the early 1970s, when the Vietnam War raged a vast ocean away, and Nixon reigned in the White House-he might have devised a play that felt and sounded very much like Bruce Norris' Purple Heart." -Chicago Sun-Times

"Norris's [The Infidel] is a masterpiece of understatement. His characters reveal themselves in sparkling, definitive language, . . . ." -Beverly Review