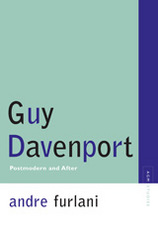 Guy Davenport (1927–2005), an American writer of fiction, poetry, criticism, and essays, a translator, painter, intellectual, and teacher, brought a breadth and depth of knowledge to his pursuits that few other writers could approach, let alone appraise. In Andre Furlani, this twentieth-century American master has finally found an apt critical reader. In this first sustained critical study of Davenport, Furlani elucidates the depths of Davenport's fiction and its poetic precedents, brings a rare understanding to the author's reworking of twentieth-century literature and intellectual history, and offers unusual insight into his compositional technique.

Furlani explores key themes across the spectrum of Davenport's fiction: pastoral utopia; twentieth-century dystopia; sexual ethics; the mythologizing of childhood; the inseparability of the archaic and the modern; and a celebration of the union of sophia, eros, and poesia. Whether Davenport's view of art and the cosmos should be called "postmodern" is a question that Furlani considers closely--offering, finally, a new aesthetic for this American original who, in these pages, at last receives the thorough and meticulous attention he has long merited.
AUTHOR BIOGRAPHY
ANDRE FURLANI is an associate professor in the English department at Concordia University in Montreal, Canada.
TABLE OF CONTENTS


Acknowledgments
Introduction: For Davenport
1. Invention of the Archaic
2. The Prose Ideogram
3. "By Pan": Eclogues
4. To Write Paradise
5. Everything Could Be Otherwise, Too
6. "This Too Can Be Shown": Sexuality
7. Postmodern to Metamodern