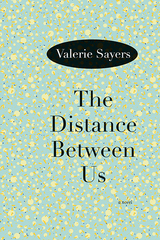 The Distance Between Us: A Novel
by Valerie Sayers
Northwestern University Press, 2013
Paper: 978-0-8101-2723-4
Franny Starkey has been breaking men’s hears since she was a teenager in Due East, South Carolina. Now a married mother of three, she no longer turns heads the way she used to. Michael, her drug-dependent playwright husband, cannot forget the excitement of their gun-running honeymoon in Ireland. Sayers creates an engaging novel that follows Franny’s path from her early, poverty-ridden days to her hedonistic college life to her longings for an artistic career while changing diapers in a Brooklyn apartment. The constant in her life is Steward Morehouse, a well-to-do nerd from Due East, who loves Franny. When Stewart and Michael collaborate on a play, the lives of these three become more complicated than Franny could have imagined. Sayers gracefully weaves all of this into a cohesive and compelling tale.
AUTHOR BIOGRAPHY
Valerie Sayers is the author of five novels: Due East; How I Got Him Back, or, Under the Cold Moon's Shine; Who Do You Love; The Distance Between Us; and Brain Fever. Who Do You Love and Brain Fever were named New York Times "Notable Books of the Year," and a film, Due East, was based on her novels Due East and How I Got Him Back. She has received a Pushcart Prize for fiction and a National Endowment for the Arts literature fellowship and has served on two NEA literature panels. Her stories, essays, and reviews appear widely in such journals as Zoetrope, Ploughshares, the New York Times, the Washington Post, and Commonweal, and have been cited in Best American Short Stories and Best American Essays.