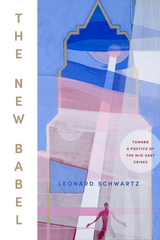 The New Babel: Toward a Poetics of the Mid-East Crises evokes and investigates—from a Jewish American perspective and in the forms of poetry, essays, and interviews—the Israeli-Palestinian conflict, America’s involvement as both perpetrator and victim of events in the Middle East and Afghanistan, and the multiple ways that poetics can respond to political imperatives.

The poems range from the immediately lyrical to the experimental forms of the “Apple Anyone Sonnets” series, which relies heavily on the Arabic but has Shakespeare as its scaffolding.

In the essays, Schwartz calls on the power of poetry—and of some of the great poets in the Arabic, Jewish, and American traditions—to help rethink the battle lines of the contemporary Mid-East, with the Jewish philosopher Martin Buber looming large.

In these creative, analytical, and conversational moments, Leonard Schwartz rethinks the battle lines of the contemporary Middle East and calls on the power of language as the essence of our humanity, endlessly fluid, but also the source of an intentional confusion there is a necessity to counter.

AUTHOR BIOGRAPHY
Leonard Schwartz is the host of the radio program Cross Cultural Poetics, which features interviews with poets, thinkers, performers, and artists from all over the world. He is the author of At Element and IF, and editor and co-translator of Cinepoems and Others: Selected Poems of Benjamin Fondane.
REVIEWS

“A highly original voice engaged in a creatively subversive way with the issues of our day.”

—Mohja Kahf, author of The Girl in the Tangerine Scarf


“An exemplary inquiry into the relationship between the power of words and worldly power.”


“This collection is like a map of roads all leading to this day today.  Accumulating alleyways and tunnels and bridges are lighted for us, with glimmers of clear sunlight falling on figures left behind (Buber, Scholem, Ibn ‘Arabi) and poems too, and recorded thoughts, as from those who could see only a certain distance.  ‘We all live in Baghdad now.’ This critical map of our situation/condition is truly useful as a way to see what has happened and what could (have) to all of us. I know what it means and why it hurts.”