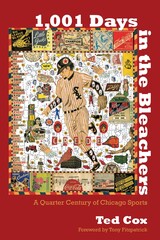 Loyal sports fans follow their teams through peaks and valleys, but in no other city have fans experienced the highs and lows of Chicagoans in the past generation. This collection of Ted Cox’s greatest hits writing "The Sports Section" for the Chicago Reader from 1983 to 2008 constitutes an intimate history of Chicago teams during these years. From the triumphs—the six titles won by the Bulls, the Super Bowl champion 1985 Bears, and the White Sox winning the World Series in 2005—to the regularly occurring collapses of the Cubs, Cox puts his audience on the scene. He evokes the fan’s experience with a level of vivid detail now nearly extinct from sports journalism. Cox writes like an ordinary observer who just happens to have excellent seats and easy access to the players and coaches. 1,001 Days in the Bleachers stands not only as a chronicle of Chicago’s teams but also as a portrait of the evolution of professional sports and their place in the life of the city.

Ted Cox has worked as a journalist in Chicago since 1981. From 1983 to 2008, he wrote "The Sports Section" for the Chicago Reader. From 1994 to 2011, he wrote for the Daily Herald, covering local politics and sports and writing reviews of music, theater, books, and television.

A Bad Case of Cubosity

Requiem for a Ballpark

The End of Some Things

‘Don’t Worry About Getting Hurt’

Denying Our Own Eyes

Basketball in Black and White

Bringing It All Back Home

Three-peat: The Jordan Is Mighty and Shall Prevail

Tanned by the Spotlight

A Sense of the Familiar

A Team as Great as Payton

Tale of the Tape

Mensches of the Midway

The Bleachers in Winter

So Beautiful, So What?

Tyson at the Auditorium

Bloom of the Rose