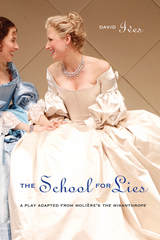 The School for Lies: A Play Adapted from Molière's The Misanthrope
by David Ives
Northwestern University Press, 2012
Paper: 978-0-8101-2882-8
Adapted from Molière’s The Misanthrope, David Ives’s The School for Lies tells the comic tale of Frank, who shares with Molière’s Alceste a venomous hatred of the hypocrisy that surrounds him. Like his predecessor, Frank gets into trouble for insulting the work of a dreadful poet and falls in love with Celimene, a witty widow. In Ives’s madcap version, however, Celimene returns Frank’s affection because she wrongly believes him to be King Louis XIV’s bastard brother. Borrowing from Shakespeare, reality TV, and everything in between, The School for Lies is an inspired entertainment as well as a pointed study in self-delusion, all rendered in sparkling couplets.
AUTHOR BIOGRAPHY
David Ives is the author of a collection of one-act comedies, All in the Timing (1994). His other plays include Ancient History (1990), Time Flies (2001), New Jerusalem: The Interrogation of Baruch de Spinoza (2008), Is He Dead? (2008, adapted from Mark Twain), The Liar (2010, adapted from Corneille), The Heir Apparent (2010, adapted from Regnard’s Le Légataire universel), and Venus in Fur (Northwestern, 2011).
REQUEST ACCESSIBLE FILE