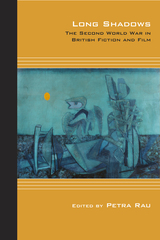 Few countries attribute as much importance to the Second World War and its memory as Britain; arguably nowhere else has this conflict developed such longevity in cultural memory and retained such presence in contemporary culture. Long Shadows is about how literature and film have helped shape this process in Britain. More precisely, the essays collected here suggest that this is a continuous work in progress, subject to transgenerational revisions, political expediencies, commercial considerations, and the vicissitudes of popular taste. It would indeed be more accurate to speak of the meanings (plural) that the war has been given at various moments in British cultural life. These semantic variations and fluctuations in cultural import are rooted in the specificity of the British war experience, in the political aftermath of the war in Europe, and in its significance for Britain’s postwar position on the global stage. In other words, the books and films discussed in these essays respond to how the war has been interpreted and remembered; what is at stake is the way in which the war has been emplotted as a hegemonic cultural narrative about Britain.
AUTHOR BIOGRAPHY
PETRA RAU is a senior lecturer in modern literature at the University of East Anglia and the author of Our Nazis: Representations of Fascism in Contemporary Literature and Film.
TABLE OF CONTENTS

Chapter 1 (Gill Plain): Escaping 1945: Popular Fiction and the End of the War

Chapter 2 (Richard Farmer): “Remember the Torrin”: Positioning In Which We Serve

Chapter 6 (Elizabeth Maslen): "Someone Should Put it on Record": Storm Jameson and "Witness Literature"

Chapter 8 (Petra Rau): “Knowledge of the Working of Bombs”: The Strategic Air Offensive
in Rhetoric and Fiction

Chapter 9 (Victoria Stewart): “A Bomb Made of Words”: Letter-Writing
in Fictions of the Second World War

Chapter 11 (Sue Vice): The Nazis in Britain: Representations of the Wartime
Occupation of the Channel Islands