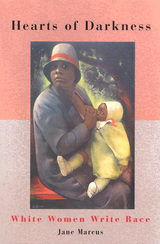 In this book, one of modernism's most insightful critics, Jane Marcus, examines the writings of novelists such as Virginia Woolf, Nancy Cunard, Mulk Raj Anand, and Djuna Barnes-artists whose work coincided with the end of empire and the rise of fascism before the Second World War. All these writers delved into the "dark hearts" of imperialism and totalitarianism, thus tackling some of the most complex cultural issues of the day. Marcus investigates previously unrecognized ways in which social and political tensions are embodied by their works.

The centerpiece of the book is Marcus's dialogue with one of her best-known essays, "Britannia Rules The Waves." In that piece, she argues that The Waves makes a strong anti-imperialist statement. Although many already support that argument, she now goes further in order to question the moral value of such a buried critique on Woolf's part. In "A Very Fine Negress" she analyzes the painful subject of Virginia Woolf's racism in A Room of One's Own. Other chapters traverse the connected issues of modernism, race, and imperialism. In two of them, we follow Nancy Cunard through the making of the Negro anthology and her appearance in a popular novel of the freewheeling Jazz Age. Elsewhere, Marcus delivers a complex analysis of A Passage to India, in a reading that interrogates E. M. Forster's displacement of his fear of white Englishwomen struggling for the vote.

Marcus, as always, brings considerable gifts as both researcher and writer to this collection of new and reprinted essays, a combination resulting in a powerful interpretation of many of modernism's most cherished figures.

AUTHOR BIOGRAPHY
Jane Marcus is Distinguished Professor of English at CUNY-Graduate Center and City College of New York. She is the author of Virginia Woolf and the Languages of Patriarchy; Art and Anger: Reading Like a Woman; The Young Rebecca West; and other works.
TABLE OF CONTENTS